Cookshack smokers are used by many different types of people and businesses.  One of the groups who are the most passionate and devoted to the art of barbecue are competition cooks and their teams.   Teams from all across the nation use our Fast Eddy™ by Cookshack line of pellet smokers and pellet grills to compete in contests large and small. The unit that is most popular with these teams is the Fast Eddy’s™ by Cookshack FEC100.  With proper management, you can use this one smoker to do all four KCBS categories using this one awesome unit! Check out this video to see how.

You may wonder how teams who use our equipment perform in contests.  Of course, each week is different, but many of these teams are consistently successful.

Here are a few teams that we wanted to recognize:

Hawg Doctors from Geneseo, NY  – Michael and Andrea Sawyers: They competed for the first time at the American Royal World Series of BBQ Invitational event and placed 15th out of over 170 teams! They own three FEC100 units.

Bill and Lynn Pruchnik: They compete in contests from Massachusetts to Mississippi and have Top 10 places in most of these contests. They use their FEC100 to run their catering and vending business as well.

Hickory and Spice BBQ from Tustin, CA – Rick, Luke, and Andrew Mysse: 2015 was their rookie season competing, and they walked to the Winner’s Circle in 7 out of the 8 contests! They won 1 Grand Championship, 1 Reserve Grand Championship, and three 1st place briskets with one earning a perfect 180 score! They compete with the FEC100 and plan on adding an FEC120 in the future!

Down to Smoke (DTS BBQ) Team from Phoenix, AZ – Phil Johnson and Howard Daley Jr.: Phil the Grill was recently on Chopped – Grillmasters and other team members have appeared on BBQ Pitmasters, BBQ Pit Wars, and other internet talk shows. They were in the Top 10 at the prestigious Memphis in May competition last year.  Phil recently told Cookshack, “I use one of the first FEC100 ever made. It has a lot of championship juices. Lol. Looking forward in using it in some big competes this year.”

W n W Bar B Q from Kearney, NE – Gary, Marty, and Bill Wendt: They have owned their FEC100 since 2014, and they won three Grand Championships last year in the MWBA circuit. They also placed 10th in the Sam’s Club Regional.  They attended our Competition Cooking Class in December of 2014 and their credit their recent successes to this class and the FEC100.

Cookshack has a competition team that tries to compete in four to five contests a year although last year we only made two contests.  Our team consists of Cookshack President/CEO, Stuart Powell, his daughter Jessica James, Cookshack Continuous Improvement Manager, Butch Flick, and Cookshack Customer Service Rep and KCBS Master Judge, Bill Vice.  When our team manages to get to a competition, we love to visit with as many of our customers as we can.

If you are not sure if you want to compete or not, try attending a contest in your area to see what the excitement is all about.  Barbecue folks are friendly; the smoke smells so good, and you will see a variety of smokers and setups! As always, if you need more information about competition barbecue or anything at all, contact Cookshack at 800.423.0698! 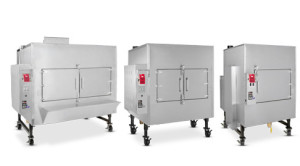 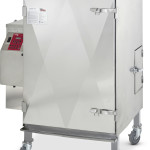 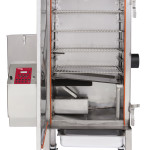 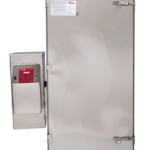 The American Royal has just ended and the Jack Daniels Championship is getting ready to start. Cookshack will help you prepare for these events next year.  October 13-20, 2015 all of our competition sanctioned, commercial listed Fast Eddy’s by Cookshack Pellet Smokers are on sale! This includes models:

Also included in the sale is the Trailer (FETR) for the FEC300, FEC500, and FEC750. These units will help you get you to the winner’s circle!  Just mention Promo Code: WIN when you place your order with the Cookshack courteous and professional Sales Team. You will save 10% off the list price!* You can also order these units online at www.cookshack.com. The Fast Eddy’s by Cookshack Pellet smokers are the choice of many teams on the competition circuit. 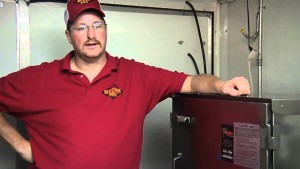 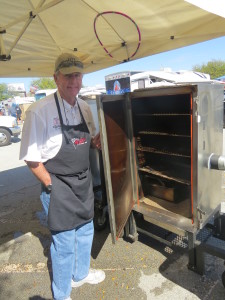 Bob with Jiggy Piggy at the 2013 American Royal

David Bouska of Butcher BBQ, Dana Hillis of Big Papa’s Country Kitchen, Bob Fite of Jiggy Piggy, and Todd John’s of Plowboys BBQ have competed using Cookshack units for years.  David won the 2012 BBQ contest at the World Food Championship in Las Vegas and was featured on the BBQ Pitmaster show using the FEC100.  Todd John won the American Royal in 2009 using his FEC100 and this past year at the American Royal he used his FEC500 to vend food and to compete in the Open.  Other notable teams that use the Cookshack units are Diva Q, GQue, Rhode Hog BBQ, Pork Patrol BBQ, Extra Mile BBQ, Smoke N Babes BBQ, Blazin’ Buttz BBQ, When Pigs Die, Burnt at Both Ends, Basic BBQ, Bear’s Smokehouse BBQ, Tebo Creek BBQ, and Dr. Nordy’s BBQ. 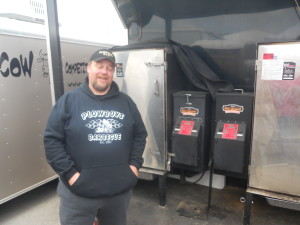 Why do these award-winning pitmasters prefer Cookshack Pellet Smokers?  Todd Johns of Plowboys considers his 2 FEC100’s a member of his cooking team.  They handle his fire management.  He can cook by himself, and he does not have to worry that his temperatures will not be consistent.  He can roll into a contest at 6 pm, prep his meats and be ready to cook quickly.  The Fast Eddy’s by Cookshack Pellet smokers put you in control so you can concentrate on your flavor profiles and making those turn-in boxes!

These units feature a digital Cookshack IQ5 controller that lets you set the smoke, cook, and rest time and temperature. The heat and flavor source is 100% food grade wood pellets. This Pellet heat is controlled by a fully automated pellet system which produces very little ash as compared to stick burners.

Act quickly to take advantage of the 10% off of the list price on these award winning, quality built units.  Use Promo Code WIN to get the savings! Call Cookshack at 1-800-423-0698 or order online at www.cookshack.com.

*not valid with other promotions or discounts

Feeling lucky? Register for the Fast Eddy’s Poker Tournament that will be held on Thursday night at 6 pm for a chance to win an FEC500 on a trailer.   It is worth over $21,000! Friday night they will be hosting a get together, stop by for some food and fun! The Cookshack Team would love to spend time with you.

Why do countless pit masters prefer the FEC100?  Former American Royal Grand Champion, Todd Johns of Plowboys, considers his twin FEC100 a member of his cooking team.  They handle his fire management.  He can cook by himself, and he does not have to worry that his temperatures will not be consistent.  He can roll into a contest at 6 pm, prep his meats, and be ready to cook quickly.  The FEC100 puts you in control so you can concentrate on your flavor profiles and making those turn-in boxes!

The FEC100 features a digital Cookshack IQ5 controller that lets you set the smoke, cook and rest time and temperatures. The heat and flavor source comes from the 100% food grade wood pellets. This pellet heat is controlled by a fully automated pellet system that produces very little ash as compared to stick burners.  If you want more a deeper smoke flavor, Cookshack offers the optional smoke enhancer for all Fast Eddy’s™ by Cookshack pellet smokers.

Do you need additional information about Cookshack or Fast Eddy’s by Cookshack products? Call one of the sales professionals at Cookshack at 1-800-423-0698 or check out their website at www.cookshack.com or www.pelletcooker.com.

Frank of Blazin’ Buttz BBQ has been successful this year on the competition barbecue circuit.  The team hails from Patchogue, NY and uses a two FEC100’s.  Other team members are Bob and Laura Schwarz.  Here are some of their recent accomplishments:

Quite an impressive display of barbecue prowess!  Congratulations to the entire team and keep on smoking!  We wish you continued success! 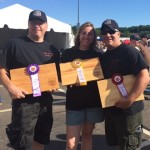 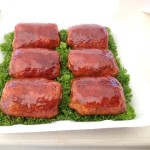 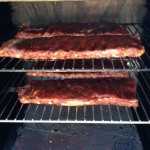 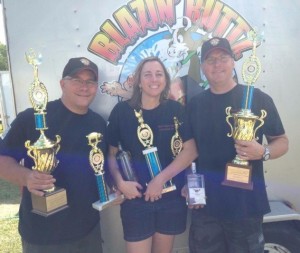