The 411 on Cookshack Reviews

Cookshack has received a few questions about how the new website works. Hopefully, over the next few months while people get used to the new site, we can help make finding information easier. Here is a little bit more information on Cookshack Reviews including Howtos.

What reviews does Cookshack Publish?

We publish ALL of the new reviews we receive online. 1 star or 5 star, our reviews are viewable on our website. We also distribute our reviews during weekly meetings so everyone knows exactly what issues or compliments customers have. Feel free to leave an honest review. We feel that reviews are the only way anyone can make an educated decision on what product will best fit their needs, even if it’s not with us. You can also find more reviews on our Facebook Page.

How can I view the current online reviews?

To see the reviews already made for a product, follow these steps

How do I write a Review for a Smoker? (Click through method)

Not only can you write a review of each of our smokers, pellet grills, charbroilers and pizza oven, but also leave a review on any product we sell on our website. Unless you already know where everything is on our website, the easiest way to get to a product to review is to use the search tool.

How do I write a review for something other than a smoker? (Search Method)

Cookshack smokers are used by many different types of people and businesses.  One of the groups who are the most passionate and devoted to the art of barbecue are competition cooks and their teams.   Teams from all across the nation use our Fast Eddy™ by Cookshack line of pellet smokers and pellet grills to compete in contests large and small. The unit that is most popular with these teams is the Fast Eddy’s™ by Cookshack FEC100.  With proper management, you can use this one smoker to do all four KCBS categories using this one awesome unit! Check out this video to see how.

You may wonder how teams who use our equipment perform in contests.  Of course, each week is different, but many of these teams are consistently successful.

Here are a few teams that we wanted to recognize:

Hawg Doctors from Geneseo, NY  – Michael and Andrea Sawyers: They competed for the first time at the American Royal World Series of BBQ Invitational event and placed 15th out of over 170 teams! They own three FEC100 units.

Bill and Lynn Pruchnik: They compete in contests from Massachusetts to Mississippi and have Top 10 places in most of these contests. They use their FEC100 to run their catering and vending business as well.

Hickory and Spice BBQ from Tustin, CA – Rick, Luke, and Andrew Mysse: 2015 was their rookie season competing, and they walked to the Winner’s Circle in 7 out of the 8 contests! They won 1 Grand Championship, 1 Reserve Grand Championship, and three 1st place briskets with one earning a perfect 180 score! They compete with the FEC100 and plan on adding an FEC120 in the future!

Down to Smoke (DTS BBQ) Team from Phoenix, AZ – Phil Johnson and Howard Daley Jr.: Phil the Grill was recently on Chopped – Grillmasters and other team members have appeared on BBQ Pitmasters, BBQ Pit Wars, and other internet talk shows. They were in the Top 10 at the prestigious Memphis in May competition last year.  Phil recently told Cookshack, “I use one of the first FEC100 ever made. It has a lot of championship juices. Lol. Looking forward in using it in some big competes this year.”

W n W Bar B Q from Kearney, NE – Gary, Marty, and Bill Wendt: They have owned their FEC100 since 2014, and they won three Grand Championships last year in the MWBA circuit. They also placed 10th in the Sam’s Club Regional.  They attended our Competition Cooking Class in December of 2014 and their credit their recent successes to this class and the FEC100.

Cookshack has a competition team that tries to compete in four to five contests a year although last year we only made two contests.  Our team consists of Cookshack President/CEO, Stuart Powell, his daughter Jessica James, Cookshack Continuous Improvement Manager, Butch Flick, and Cookshack Customer Service Rep and KCBS Master Judge, Bill Vice.  When our team manages to get to a competition, we love to visit with as many of our customers as we can.

If you are not sure if you want to compete or not, try attending a contest in your area to see what the excitement is all about.  Barbecue folks are friendly; the smoke smells so good, and you will see a variety of smokers and setups! As always, if you need more information about competition barbecue or anything at all, contact Cookshack at 800.423.0698!

How Can I Increase Profits for My Deli or Meat Market? Differentiate and Upgrade your Grocery Store or Supermarket

Receive Thousands of Dollars in New Profit and New Customers

“What Piece of Equipment Can Do All That?”

How is this possible?

Will this program work in my store?

When is the right time to start?

Knowing the cost of operating a commercial smoker is important for your business.  It is one of many factors that need to be considered in determining profit margins.  Cookshack smokers and charbroilers are efficient especially when you consider the amount of meat and vegetables that you can smoke during one cook cycle.  There design will not dry or shrink meat and will give you higher yields.

Other ways Cookshack commercial smokers are energy efficient include:

See the difference a Cookshack commercial smoker or charbroiler can make to your operation. No gas required!

Are you having an issue with your Cookshack smoker and you are not sure where to start? We are here to help you out!

All of our Smokers/Pellet Grills/Pizza Ovens come with the same warranty.

For the policies regarding the loss of warranty or voided warranty, please see our full Limited Warranty Policy and our Return Merchandise Policy.

There is only one step to create a warranty claim.

Contact Cookshack’s Technical Support at 1-800-423-0698 and ask for Bill or Tony. You can also send an email to t_marlar@cookshack.com explaining your issue.

REMINDER: Always contact Technical Support before trying to place a warranty claim. Approval through Cookshack is required before any parts can be sent without cost to the customer.

Getting troubleshooting and technical support after purchasing your unit is easy.  Here are three options depending on your preference:

There are just a few things to keep in mind when looking at Cookshack warranty. 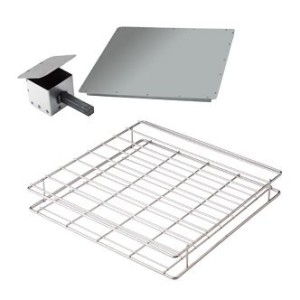 Do you own a smoker and need more options for smoking foods? Cookshack has the answers you need! We offer a full line of accessories to fit our smokers and grills, including cookbooks, sauces, spice blends, and rubs. These products are designed to make you the best barbecue cook ever! Looking for accessories? All Commercial Smoker Accessories are now on sale for three days starting February 24th and ending February 26th. Use Promo Code: FEB3DAY to save 15% off the regular price when you order online or by phone.

Do you want to make smoked cheeses, lox-style salmon, pork belly, and nuts? We offer the Cold Smoke Kit that will turn your smoker into a cold-smoking machine. The Cookshack Cold Smoke Kit is crafted of stainless steel and contains an insulated baffle, smoke box, and instructions for use. Check out this recipe for cold smoking salmon. 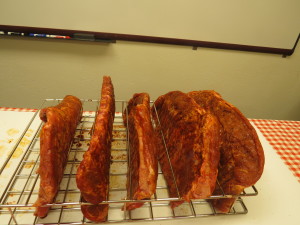 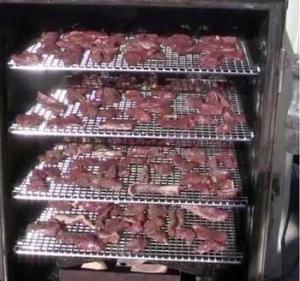 The Cookshack RibRacks and Seafood Grills are additional options to make it easier to smoke large quantities of ribs, vegetables, and fish. The RibRacks decrease turnaround time in a busy kitchen by speeding up the loading and unloading of slabs of ribs. The seafood grill has a fine mesh to help fine or delicate items fit perfectly in the smoker. Cookshack Jerky Rods, for the electric smoker, are handy for hanging strips of meat in the smoker or to use when making kabobs. For instructional videos and to see these accessories in action, check out the Cookshack YouTube Channel and get inspired! 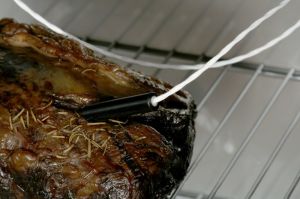 The Cookshack meat probe is simple to use. Plug in the meat probe into the connector on the IQ Controller, run the cord through the door seal, and attach the end of the probe through the meat. Then just set the temperature on the controller to cook the product to the internal temperature that you need. The smoker oven will automatically drop to a hold temperature once the target temperature has been reached. This really makes smoking any item as simple as possible.

If you have questions about any of these products, please give us a call at 1.800.423.0698, and we will be happy to assist you. Do not delay in ordering any or all of these great accessories designed for Cookshack smokers. The 15% off sale is for three days only! Remember to use Promo Code: FEB3DAY when you place your order. This offer cannot be combined with any other promotion or discount! 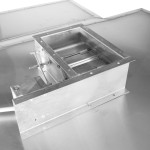 Ventilation is required for the proper operation of Cookshack commercial smokers. When planning your flue, it is important to remember several factors:

A small amount of smoke will escape from the top of the oven and from around the door. Consult your local authorities to determine which method meets your local codes: 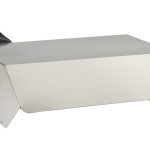 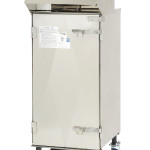 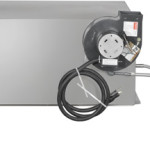 Back view of the PA002 Smokehood for the SM260 Electric Smoker

For additional information about Cookshack Commercial Smokers or venting requirements, call Cookshack at 1.800.423.0698.

Why should you use 100% food-grade pellets in your pellet grills and smokers? 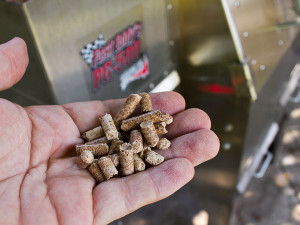 Food grade pellets contain fewer fillers and have less moisture content and ash than pellets used in wood burning stoves and furnaces. Pellets used for stoves and furnaces will also sometimes contain a gluing agent or something to bind the pellets together that is not food grade quality as required by the USDA. Pellets manufactured for wood stoves are available in two grades:  premium and standard.  Standard pellets are made from forest waste and contain branches and bark. You want to look out for bark content because bark content in pellets affects the BTU. Performance quality is vital to get the right results! 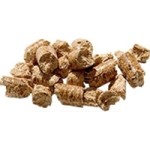 Quantity discounts are available.  Pellets are easily obtainable, inexpensive and easy to store as compared to traditional logs.  We recommend storing pellets in a dry well-ventilated area.  Do not store wood pellets near potential ignition sources.

In order to maintain your warranty in Cookshack products, food grade pellets must be used in the units.